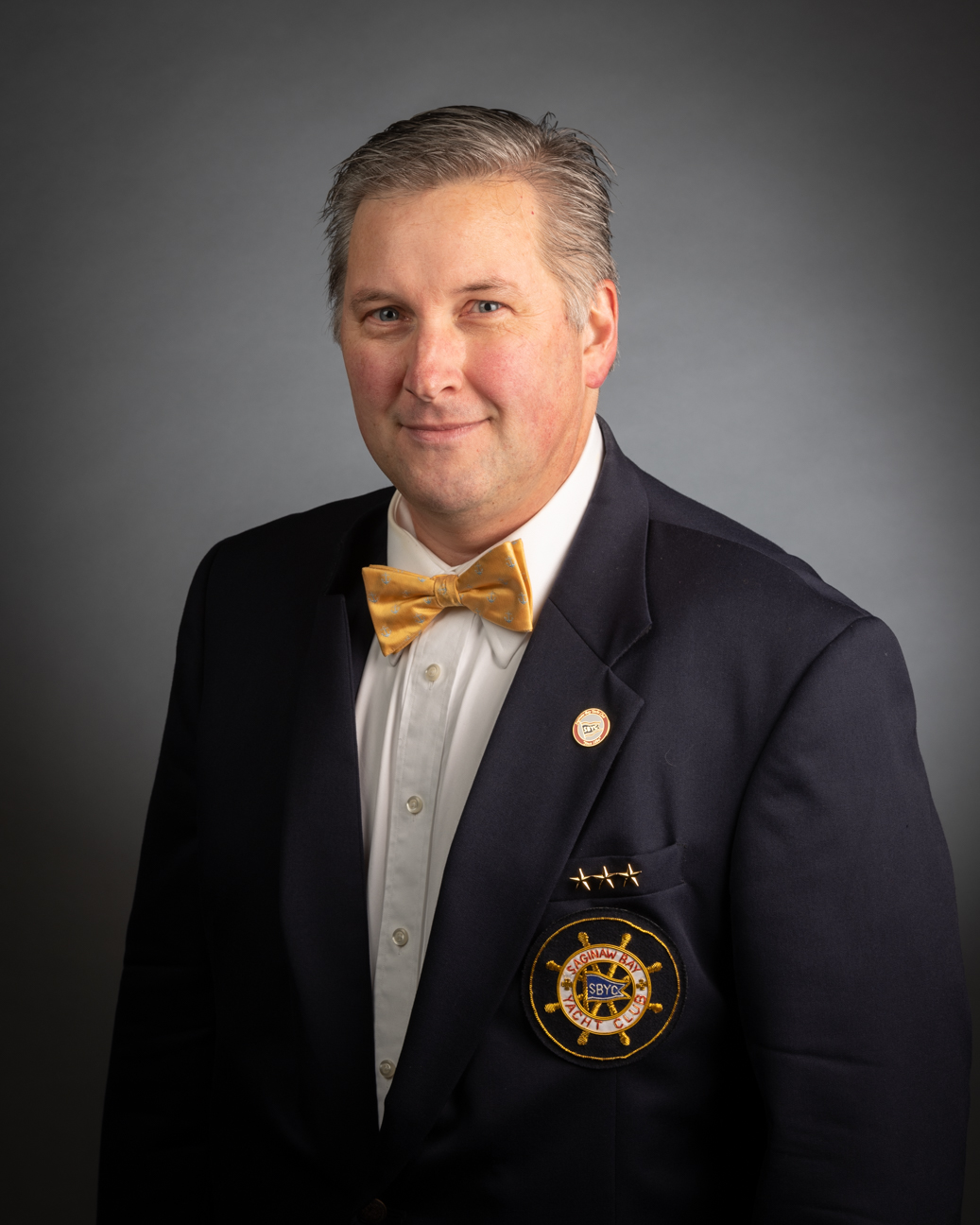 Immediate Past Commodore Greg “Voz” Vozniak is a Great Lakes Bay life-long resident who joined SBYC in 1995, during it’s 100-year anniversary. Now, 25 years alter, he is proud to be the 2020 Commodore.

Greg was born on a January day in 1967. Not just any day, this was the biggest snow storm in Michigan history at the time. That day, 27 inches of snow was dumped on Saginaw. It started snowing after Greg was born. His dad went back home to pick up Greg’s sister, however, the massive snowfall prevented them from returning to the hospital for a whole week. The only people coming and going were doing it via snowmobile.

Greg met his wife, Louise, at St. Stan’s annual picnic in 1994.  They married in 1997 and settled in Auburn where they still live today with their two children, 17-year-old Veronica and Jack who is 14.

Growing up in Saginaw, Greg was in the first graduating class of Nouvel Catholic Central High School. He then went on to graduate from SVSU with a bachelor’s degree in Computer Science. A self-described computer geek, Greg started his career as a co-op at Dow Chemical. Since then, his work has included managing computer systems at Dow and also at EDS. Currently, Greg is a process automation engineer at Dow.

When he is not boating, Greg likes to golf, bowl, downhill ski, hunt birds and putz around the garage. Greg and his family are also big Disney World fans. Well, much more than fans, Greg is a major “Disnerd”. (Yes, that is a thing. The editor looked it up). And the Vozniak Family does what is called “Disneybounding”.  (According to the Internet: Disneybounding is the act of dressing like a Disney character but while wearing regular clothes that you would wear to work, school or just hanging out at home. It has become wildly popular in recent years.) Greg and Louise go to Disney World every two or three years. And of course, they honeymooned at Disney World, as well. The whole family has been to Disneyland, too.

Greg discovered boating while hanging out with a friend on Sanford Lake. His first boat was a 24-foot Baja. A work colleague, club mamber Ron Trainor, brought Greg to SBYC for the first time and introduced him to bigger boats. In 1995, when Phil Wright was the Commodore, Greg joined the club. In 1998, Greg and Louise decided to buy a house. So, they sold their boat and traded up to a house. They stayed boatless until 2012. Greg remembers the hot summer day that he and Louise were in the backyard with the sprinklers going and the sun beating down on them. Louise looked at hime and said “How about we get a boat?” About six weeks later, it was a done deal. The 40-foot 1992 SeaRay 400 Express they bought (and still have) was previously owned by country music star Alan Jackson. You can see the original plaque on the boat stating “Specially Made for Alan & Denise Jackson.” Plus, the boat still sports its original name, “Neon Rainbow,” which was the title of Alan Jackson’s first musical hit.

Greg and Louise spent a lot of time at the club before having kids. They enjoyed Action Auction, Skeg Night and all other events. Greg is happy that these same traditions remain today. Staying on the boat and making new friends are other great benefits. “What I like best about the club is how down to earth it is”, explains Greg. It’s all about the people – it’s a community.” He relays a funny story from years ago. Greg had a couple of friends help launch and dock his boat at SBYC. Afterwards,  Greg invited them in for a cocktail and food. They insisted that they were not properly dressed to come inside. When he convinced them to follow him in, he was greeted by bartender Myles with an exuberant “Voz!” His friends were immediately comfortable and confessed that “this is not what we were expecting.”

Regarding Greg being this 2020 year Commodore, he said: “I’ll be part of the history of the club now.” He is proud of the six years he has served on the board, “I served for the betterment of the club.” Greg is looking forward to building membership. “The social aspects of our club offer so much,” says Greg. “We need to encourage people to experience the benefits of the club and enjoy it like we do. Let people see what we have, so they will want to join.” More boating members are also needed. “We need to fill the slip.” I’m pretty approachable, says Greg. “Don’t hesitate to reach out. If something comes up, call me. I plan to be visible”.